Documents required to perform a legal wedding ceremony in Jamaica

In order to get married on the island of Jamaica a marriage licence must be granted by the government of Jamaica giving approval for your wedding. As your wedding planners, we will take the hassle out of applying for your licence. We require only that you submit a few documentations to get the process started.
​
Documents Required Where Applicable​
Notarized copy of birth certificates
Proof of Divorce (if applicable) Notarized copy of divorce (must include Divorce Absolute page)
Notarized copy of driver’s license
Letter stating couple’s occupation, age, date of birth & fathers name - does not need to be notarized
Notarized copy of death certificate in the case of widow/widower
Notarized copy of adoption papers also reflecting name changes
Notarized Change of name deed if other than that stated on the birth certificate which is not associated with a marriage or adoption
Legal translation of documents to English where originals are in another language

IMPORTANT NOTES:
-All applicable documents are to be submitted 3-4 months prior to your wedding date. A late fee will be applied for documents submitted after this time.
-Each individual document must be notarized by a Justice of the Peace or by a Notary Public.
-Scan and email notarized documents to info@bandooevents.com prior to mailing.
-All photo IDs must be clear & contain your Signature

If one or both persons live in Jamaica, the documents may be sent via Knutsford Express to:
Bandoo Events Solutions
C/O Esther Bandoo
Ocho Rios
St. Ann
876-812-1914
All delivery fees must be paid by sender
.

Most of our religious weddings are done outside of the church at beach, garden or waterfall venues. This allows you more freedom to include special items such as:
Is a religious Wedding Legal?
Religious Weddings are legally binding in Jamaica. Once married Bandoo Events Solutions will apply for your marriage certificate which is issued by the government of Jamaica. Your certificate will be couriered to you within 3-6 weeks of your wedding date.

Why choose a Religious Non-Denominational Wedding?
​
A civil ceremony is simply a nonreligious, legally recognized marriage ceremony presided over by a legal official instead of a religious one. In a Civil wedding there is no blessing of the rings, reading of scripture or prayers for the couple.  All documents will still be needed for the application of your marriage licence. Once married, a marriage certificate will be generated by the government of Jamaica making your marriage legally binding.

Why choose a Civil Wedding?
A symbolic ceremony is the promise of love between two people.  It is the exact same as a regular wedding ceremony, including the exchange of vows and exchange of rings.  The only difference is that it is not legally binding.

VOW RENEWAL
The Vow Renewal is similar to the symbolic ceremony in that no paperwork is needed as you are already legally married.
Simply put, a vow renewal is a way to celebrate your marriage. Perhaps you've made it to 2, 5, 10, 25 or 50 years together and you want the world to know that you'd do it over again in a heartbeat or maybe you just want to reaffirm your commitment to each other.

<
>
A Unity Sand Ceremony is a type of unity ceremony that represents two people coming together in marriage.. Typically, each person has a different colored sand which is poured from separate vessels  into one clear vessel, forming a layered effect 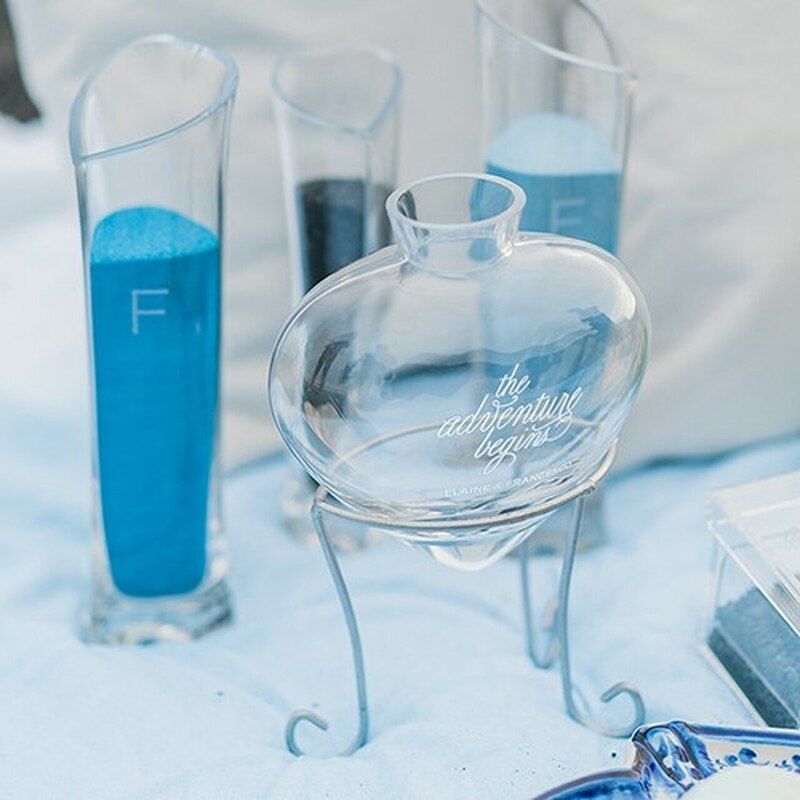 How is a sand ceremony performed?
First, the officiant says a few words about the ceremony and its meaning.
What is needed for a sand ceremony?
“You need only acquire the physical items needed to conduct this ceremony, namely:
Sand Ceremony Script
BRIDE and GROOM, today you join your separate lives together. The two separate bottles of sand symbolize your separate lives, separate families and separate sets of friends. They represent all that you are and all that you will ever be as an individual. They also represent your lives before today.
As these two containers of sand are poured into the third container, the individual containers of sand will no longer exist, but will be joined together as one. Just as these grains of sand can never be separated and poured again into the individual containers, so will your marriage be.

In the Unity Candle Ceremony the bride and groom each take a lit candle (often lit by their mothers to symbolize their individual families) and simultaneously light a third larger "unity candle." They may blow out their individual lights, or leave them lit, symbolizing that they have not lost their individuality in their unity.

Unity Candle Script:
Officiant:
It was very important to _________and _________that we take some time today to honor the two wonderful families who have guided them to this very moment. Their love, support, and endless encouragement have prepared our bride and groom to step into their new lives with optimism and grace. A wedding is not only a union of two soulmates, but a declaration of the lives that have come before them: modeling love and raising children into the people who stand before you today.LIGHTING OF THE CANDLES:
Officiant:
We have three candles. The two candles on either side represent the blessing of this marriage by each family. The unity candle in the center represents the merging of both families together as one - strong, supportive, and enduring.As representatives of _________’s family, we have _________and _________coming forward to light their candle.
As representatives of _________’s family, we have _________and _________coming forward to light their candle.
Please come forward and light your candles at this time.
(Families light each of their candles and step back to the audience)
OFFICIANT Now, as a testament to their faith and commitment to their families and to each other, _________and _________will take their respective candles and join the two flames together over the unity candle.
(Couple lights the larger candle)
A new flame has been born. This new flame symbolizes the beginning of their own family, and bids honor and respect to the families that have brought them here today.